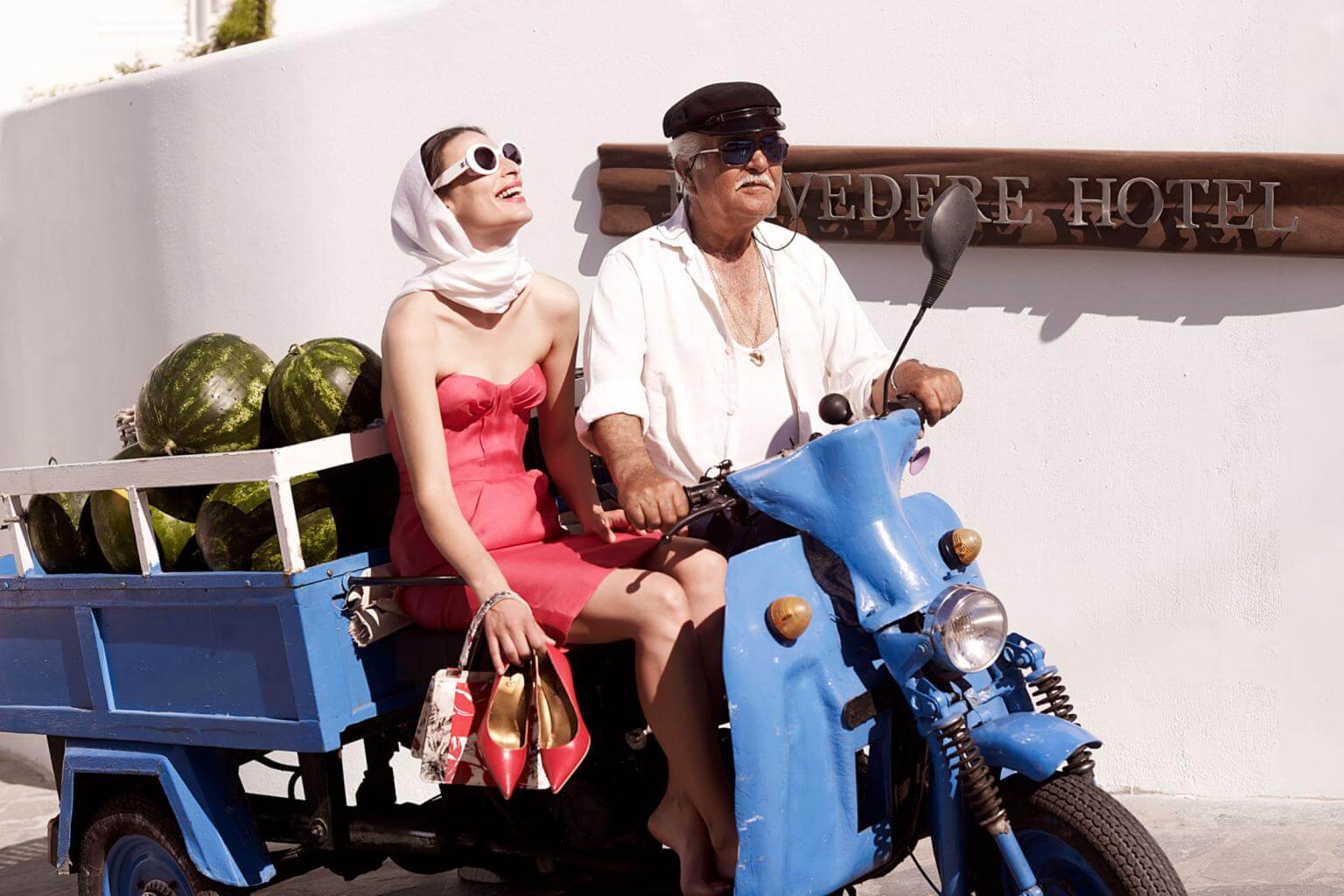 A handful of old family photos and a vintage Vogue shoot lead the Belvedere Hotel on the pursuit of authenticity while developing their visual campaign.

It all started with a headlong dive into the Ioannidis family photo archive. That and an image of Kirsty Hume roaming the streets of Mykonos on a watermelon cart, dressed in a pink cocktail dress and a matching headscarf. A perfect marriage of sophistication and artlessness, a supermodel and a vegetable vendor, an antithesis so strong it actually made sense. “I loved the Vogue shoot I did with Ellen von Unwerth in Greece with dark hair - it was fun being a brunette for a couple of days,” remembers 90s supermodel Kirsty Hume in a 2015 Vogue interview, musing on her meteoric rise through the fashion ranks. The picture in question, published in the dead of winter in the December 1995 issue, wasn’t a high point in her career alone. It also encompassed the essential qualities of the Cycladic summer, things we’ve all come to know and love: sweating through impossibly chic outfits, ditching heels for sandals on the cobblestoned streets and eating watermelon under the scorching sun. Salty skin and sticky fingers were the only way to go.

But the most important part of the Greek summer has always been the locals, utterly nonchalant in the face of absurdity (see watermelon vendor above) and hospitable to a fault. The wandering flower salesman, the accommodating porter, the patient fisherman, the itinerant grocer and the retired sea captain had always been part of the island fabric, punctuating lazy afternoons with their friendly banter. That’s exactly what the Belvedere Hotel set out to capture, casting a nostalgic glance on days gone by in pursuit of that elusive Mykonos feeling. 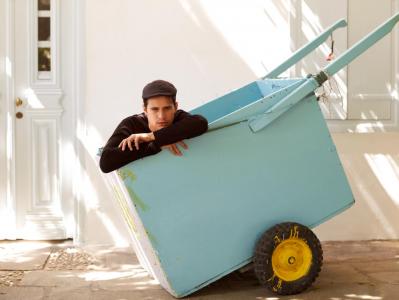 A flurry of activity ensued and a few weeks later everything magically fell into place: Petros the Pelican was recruited with a little help from the local Municipality, a vintage porter’s cart was conjured up out of thin air and even a real live donkey was magically transported on Belvedere Hotel grounds. “Mykonos Nostalgia”, shot over an unforgettable three days, pays tribute to 70s jet set utopia, where holidaymakers and locals blended seamlessly against the sun-kissed backdrop, no questions asked. This shared experience remains at the heart of the Belvedere Hotel, thoughtfully designed on the principle of the Cycladic neighborhood, bringing guests close enough to build community, while still allowing space for their individual personalities to shine. 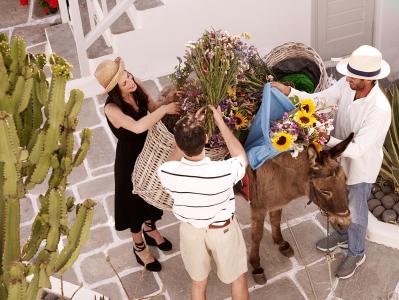 Taking a cue from Ellen von Unwerth’s strategic decision to turn ultra-blonde Kirsty Hume into a brunette, “Mykonos Nostalgia” was built around Esther Mastrogianni’s dark allure, a classically Greek beauty who set the tone for the entire campaign, alongside willowy Nastya Timoshenko and doctor-in-training Alexandros Apostolou. The hotel staff deserves a badge of honor for their wholehearted participation, as do the locals and young Mickey, standing in for an entire generation of children raised on Greek sunshine, spending one summer after the next on the island of Mykonos until it became part of their DNA. What is, after all, life, if not a magical balancing act, where children and a vibrant social life are all part of the same dizzying mix? 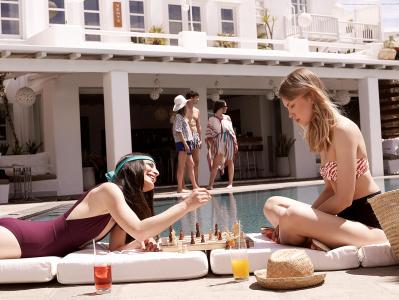 Slim Aarons certainly had a lot to say about that, rising to fame in the 60s and 70s as the jet set’s favorite chronicler and most adoring fan. After a stint in the army, he claimed that World War II had taught him the only beach worth landing on was “decorated with beautiful girls tanning in a tranquil sun”. But what he really excelled at was poolside glamour. An homage to his work was the best way to capture those perfect in-between moments, when it is too early to drink but too late not to, and a game of chess by the pool is the only way to take your mind off cocktail hour! 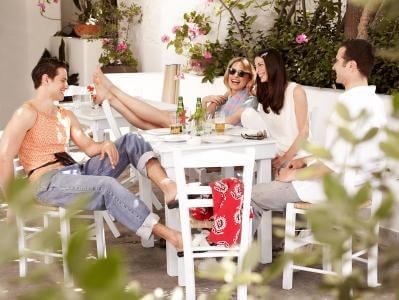 “Mykonos Nostalgia” was shot by fashion and lifestyle photographer Vangelis Kyris with the invaluable assistance of Anatoly Georgiev. Lazaros Tzovaras, assisted by Nefely Bouhayiar, was responsible for the resort wear and the odd jeans and T-shirts, breaking Slim Aarons strictly enforced rule about jet set dressing (no jeans, no t-shirts, no trainers). Vanessa Koutsopodiotou (hair) and Dimitris Sarantou (make-up) were on beauty duty and designer and longtime Belvedere Hotel collaborator Christos Ouzounis reigned supreme over art direction. The entire project was managed by Vicky Pouliou, who was also industrious enough to provide the props, both inanimate and living!

We would be remiss if we didn’t mention Petros the Pelican, originally a wildlife rescue that has long become the island’s mascot. According to legend, the first pelican was discovered by a fisherman in 1954 nursing a wound, but, after recovering, he refused to fly away. Instead, he made Mykonos his home, frolicking around the port until the locals deemed him a keeper. Petros is now part of the island’s history, although no one really knows how long the original bird lived before he had to be replaced. What we do know is that Mykonos wouldn’t be the same without him…